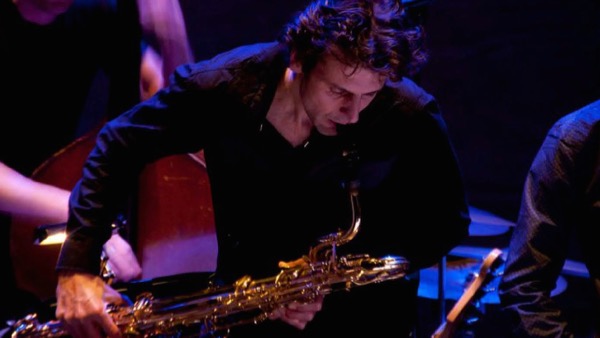 “The beautiful opening solo by onno van swigchem transformed the music into a dialogue”
Stefan de graaf jazzenzo
Performance by tetzepi with Louis Sclavis in the BIMhuis, Amsterdam

Storyteller
As a saxophonist I’m a storyteller. I love to carry people along in an arc and in the experience of the music. It began in a workshop led by Gerard Ammerlaan. I hadn’t been playing saxophone for long, and already in the first rehearsal it was “OK, you take the solo”. “Who, me?” Stress! “But how should it go, and what key is it in?” No reply. Only a repetition: “Go for it”. It was an instructive moment, and it left me wanting more.

During my development as a musician I searched out improvisation in many forms. In complex structures of contemporary music in the ‘bigtet’ Tetzepi, but also as the conductor of ‘instant compositions’ shaped on the spot: absolutely nothing agreed in advance, no notes on paper, but following and giving form to what develops in that particular space and time. But also in small and medium-sized line-ups: as a soloist, in duos, in my own band De Bende van Drie(‘The Gang of Three’). At venues and festivals in the Netherlands, or with the Oorsmeer saxophone quartet and other bands on the road in France, Italy or Spain.

I love music when there’s something to experience, and so I try to make sure that happens, both as a player and a teacher. When you’re truly in the moment then something can happen; if not then we’re listening to some or other form of automatic pilot and our attention drifts.

The added value of improvisation
As I see it, the added value of improvisation is that the music is made in the moment itself. Nothing helps to create excitement more than not knowing what will happen in the next second. And you don’t have to turn everything upside down or leave everything open for this to happen. Based on existing tunes or free, just as long as there is space to explore. Exploring this space is the ultimate enjoyment.

I’ve always found the mechanisms underlying this fascinating: why does it work one time and not another? What is the magic? It’s not a question of ‘just doing something’. It’s a close interplay of emptying your mind, listening, and paying attention to what’s going on around you. Feeling, having courage and taking a leap.

‘Good’ or ‘bad’: in improvisation you feel it immediately. It’s clear to everyone, but there are few teachers to be found who have anything to say about it. Better a firm footing and proven conventions than truly giving ourselves over to the moment, with all the uncertainty that brings.

Improvisation coach
Because I missed having an improvisation coach myself I began to develop the concept. As a teacher I’ve given form to the theme of improvisation for many years. In workshops such as the Island Method I show that a chord sequence is not a straitjacket but a source of inspiration. In learning groups I stretch the fixed frameworks of the music. I lay down the challenge to step into freedom. Because that is everywhere around us, and it’s a shame not to use it!

Learning in freedom
And there’s also freedom in the field of learning. It’s a true art to happily develop yourself precisely in the direction where you want to go, where your natural power lies. I wrote the book Play Yourself and this website of the same name with the invitation to unchain yourself and become a student of life. Once nothing is compulsory, everything is possible.